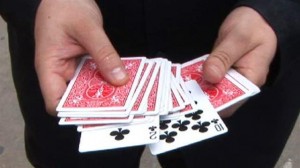 Want to amaze your friends with your magic skills, then read on. In this easy magic trick, the spectator separates a deck of cards into four piles, mixes them a bit, and at the end, discovers that there’s an ace on top of each pile. All you need is a deck of cards, an easy setup and the secret, and you’re ready to go.

Secret:
Although the spectator thinks that he is cutting the cards in random ways, he’s actually cutting and dealing cards in a specific manner that leaves an ace on top of each of the four piles. All the spectator has to do is follow your instructions.

Materials:
A deck of cards with four aces.

Beforehand, place the four aces on top of the pack. Don’t let the spectator know that the aces are in this position.

Note that this view shows the position of the four aces in the deck with the deck face-up. When you’re performing this trick, the deck will be held face down as you or your spectator cut the cards.

Ask your friend to cut the deck so there are four semi-equal piles of cards. You need to watch where the top part of the deck with the aces lands.

For a cleaner effect, you can ask the spectator to separate the deck by dropping cards off the bottom of the deck to create the piles. This way, the pile with the aces will end up at your extreme right or left, which makes the next steps more logical.

For demonstration purposes, we’ll assume that the four aces ended up on the pile to the far right. All of the following steps will assume that the aces are in this location. If your aces end up in a different position, please adjust the instructions as given in the next step.

Point to one of the non-ace piles and ask the spectator to pick it up and hold it in his hand. Ask him to take three cards off of the top and place them on the bottom of the pile.

Then ask the spectator to deal one card from the top of the pile that he’s holding onto each of the three other piles.

With a second, non-ace pile, repeat the process of moving three cards to the bottom and dealing a single card on each of the other piles

Before proceeding to the final step and reveal, let’s review the position of the cards in each pile. Three piles (the “non-ace” piles) have a mix of random cards. We are not interested in these piles.

The pile with the aces has three random cards on top, which is followed by the four aces.

When the spectator does the same mixing process in the next step, the three random cards will be sent to the bottom of the pile, and then one of three aces will be dealt to the top of each of the other piles. One ace will remain on top of the “ace” pile.

Now ask the spectator to perform the same thing with the pile that has the aces. He’ll place the top three cards onto the bottom of the pile and then deal a card onto each of the other piles. Ask the spectator to turn over the top cards of each pile. When these cards are turned over, they’ll be aces.

Tip
After the spectator is finished dealing the cards, pause for effect. At this point, you can review what he has done: cut the cards and dealt them, and emphasize that the cards are all mixed up.